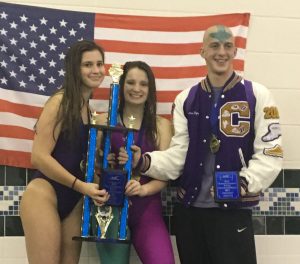 For the second straight year, a Cartersville High head coach with the last name Surrett was forced into the pool after the Bartow County Swim Championships.

In 2018, it was Mindy Surrett, who helped led the Canes to the title in her final season with the program. This time around, it was her daughter, Hannah, who took the plunge along with assistant coach Kim Rentz after Cartersville finished first in the girls, boys and overall divisions, while also adding the top individual swimmers, during a dominant showing Saturday in Adairsville.

Hannah Surrett had, thankfully, been forewarned of the tradition of the winning team’s coach being forced into the water, so she brought a change of clothes.

While the Canes barely edged out a strong Adairsville girls group by a 17-point margin, Cartersville outpaced second-place Cass on the boys side by 45 points. In total, Cartersville put up 322 points; Adairsville finished with 224; Cass piled up 158; and Woodland wound up with 90.

“I was so proud of every single one of them for pushing themselves in the offseason to come into these meets in swim season, do so well and drop time in almost every single meet,” Surrett said of her girls. “… It was so great to see all of my boys do well, too, because none of them actually swim on year-round teams. Some of them will swim on the Cobias summer league, but none of them swim year round. To see them improve so much from the beginning of the season to where they are now, to see how hard they work and how much they push themselves during the meet, it’s just really encouraging as a coach to see their dedication to the sport.”

Rogers took first in the 200-yard individual medley in a time of 2:34.52. He added a narrow victory over Cass standout Eli Wilhoit in the 100-yard butterfly. Rogers also participated in both 200-yard relay events, as the Canes won the medley and placed second in the freestyle to the Colonels. Watson Milam, Nate McDonald and Carson Teems joined Rogers on the medley team.

Vidoli, a sophomore, and Breedlove, a junior, each posted two individual wins and also combined with Cartersville teammates for a pair of relay titles.

Vidoli was victorious in the 100 and 200 free, beating out the challenge of Adairsville’s Mallory Cook on both occasions; Breedlove topped the podium in the 200 IM and 500 free, absolutely blowing the competition, well, out of the water in each; the pair combined with  Rachel Long, who added an individual first-place medal in the 100-yard breaststroke, and Gracie Siniard for victories in the 200 medley and 400 free.