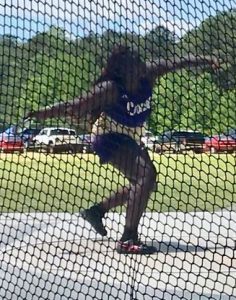 The meet was only partially completed with rain moving into area during the competition.

Coach Matt Terry said about two-thirds of the events were completed. Woodland also had pole vaulters to compete, but the Lady Cats and Wildcats not field full teams.

Of the events completed, the Dalton girls finished with 157 points. Cartersville was next with 116 and Pickens totaled 64 points.

For full results of all completed events, please see this LINK.