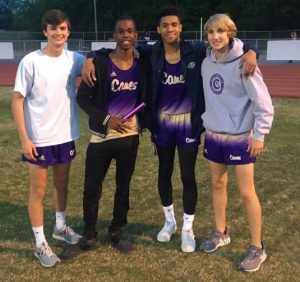 The Cartersville and Cass high boys cross country teams took first and second, respectively, while the Cartersville girls placed second and the Cass girls came in fifth in a five-team track and field meet Thursday at Gordon Central.

The Cartersville girls actually finished tied with Gordon Central for second place with 90 points each, 10 points back of first-place Sonoraville. London Shaw once again stole the show for the Lady Canes, wining both the shot put and discus throw as the Lady Canes’ only first-place finisher.

The Cartersville boys had a number of winners, finishing with 129 points, 30 more than second-place Cass and nearly 60 more than the next closest team, Gordon Central.

Other first-place finishers for the Cartersville boys included Jadon Martin in the long jump with a distance of 19 feet, 6 inches; Daniel Ejike in the 110-meter hurdles with a time of 15.88 seconds; Chris Ejike in the 300 hurdles at 42.77 seconds; and Donovan Dennis in the 400 with a time off 54.42 seconds.

The big event of the day was the boys pole vault in a matchup between Cartersville and Cass athletes who are likely to finish on the podium at state. Cass’ Stephen Smith took home first with an impressive height of 15 feet, 4 inches, while Nick Bebko came in second at 13 feet.

Other Cass first-place finishers included Brandon Martin in the high jump with a height of 6 feet, 5 inches; Nathan Gant with a discus throw of 123 feet, 5 inches; and Christene Warner in the girls 100-meter hurdles with a time of 19.53 seconds.