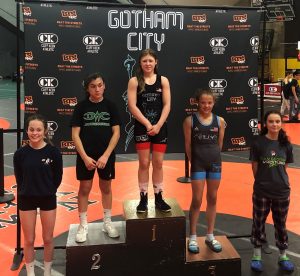 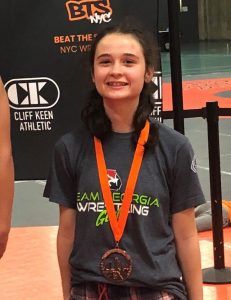 Elora Waterman places 5th in the Gotham City Girls Open in the Cadet Division 94 lbs. Weight Class.  This is the 2nd National Tournament this off-season that she has finished All-American.

Elora will be competing with the Team Georgia National Team on May 10, 2019 in Austin, TX at the 2019 Girls National Freestyle Championships and Duals Championship!

NEW YORK, N.Y. – Dozens of nationally ranked high school girls, along with many talented wrestlers who making their name on the national scene, were showcased in the respected and growing Cliff Keen Gotham City Girls Open, hosted by Beat the Streets New York this past weekend.

Two of these champions beat other nationally ranked opponents in the finals. Chavez stopped No. 8 Julianne Moccia of the Virginia Women’s National Team by fall, while Lekas defeated No. 13 Shania Gowan (Florida Jets), in 12-0 technical fall.

Elor scored an impressive 10-0 technical fall over Aoi Yamada of Japan in her final.

Other individual Junior champions were Elizabeth Dosado of the Virginia Women’s National Team at 100 and Sariah Stewart of Curby 3 Style at 200.

The Cadet division finals also featured some nationally ranked individual champions: No. 14 Dianna Holmes of Georgia Girls at 100, No. 14 Jenavi Alejandro of Team Nevada at 112, No. 3 Ally Fitzgerald of VHW – NY at 122, No. 13 Seda Tsarni of Maryland National Team at 144 and No. 5 Katja Osteen of Simi Valley- CA) at 164.

There were also numerous youth divisions contested, also featuring large brackets with athletes from across the nation.

This competition was a great tune-up event for the upcoming USA Wrestling Women’s National Championships in Irving, Texas, May 10-12.