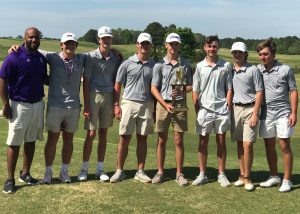 The Cartersville High Golf Team won its Area Championship on Monday in LaGrange. 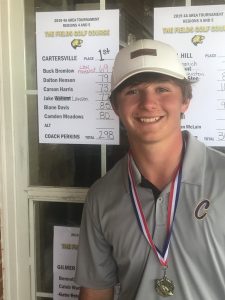 Sophomore Buck Brumlow was the low medalist as the Cartersville High golf team won its area tournament Monday in LaGrange.

With the Cartersville High baseball team looking for a return to the state championship series, the Lady Canes tennis team making it all the way to semifinals in the state tournament, and the boys soccer team still alive, the athletic programs at Cartersville are having overwhelming success in spring sports this season.

A team that has perhaps gone under the radar but has as good of a chance as any to win a ring this year is the boys golf team.

The Canes took the first step to earning a state championship by winning its area tournament Monday at the Fields Golf Club in LaGrange, which give Cartersville a bid to the state tournament May 20 and 21 at the Country Club of Columbus.

Georgia commit Buck Brumlow was the low medalist at area, and the sophomore was the only golfer under par for the day with his 69.

The second best score on the day also belonged to a Cartersville golfer, as freshman Carson Harris shot a 73, followed by freshman Jake Lawson at 77 and junior Dalton Henson at 79.

Those individuals made for a team score of 298, which made for a margin of victory of 21 strokes.

“It was pretty good,” Cartersville head coach Reggie Perkins said of his team’s performance. “LaFayette beat us last year. We knew we had lost a few people but we had a good group of people coming back and a good group of freshmen coming in. So, the way we’ve been playing all year and the scores that had been sent in, I felt pretty good about it as long as we had a good round.”

While the Canes dominated the area tournament, the margin for error will be much slimmer during the state championship.

The site is the home course for the reigning state champs and favorites, Columbus. However, according to Perkins, Cartersville is among a group of top contenders that includes Marist, St. Pius and Richmond Academy.

“It’ll be pretty good competition down there,” Perkins said. “Last year, I think we finished eighth in the state tournament and I went and pulled scores and tried to see who was returning, and there’s quite a few teams with people still returning. I think Columbus has three of their top four scorers from last year still returning and then the state tournament’s at their home course, so that’s going to be a challenge.”

Brumlow also will be a top contender for an individual state championship. He was tied for second last year with a score of 68 after the first round. He might have won a state championship then as a freshman if his second round hadn’t gotten cut short due to weather.

The state champ from last year graduated, but one of the golfers Brumlow tied for second with last year is still golfing for Columbus. Therefore, Brumlow is among the favorites for an individual state title, but he’ll have some competition.

“He’s got as good as chance as anybody coming into it,” Perkins said of Brumlow’s state title prospects. “Buck has been lights out the past five days. He’s played in a tournament every day the past five days. We played in a team tournament Thursday. He shot 67, and he played in a three-day tournament this weekend … the [Georgia State Golf Association Four-Ball Championship at Governors Towne Club], and he ended up winning it — he and his partner. I think they were telling me they were the first high school students to win that tournament ever. It’s been 48 years and they’re the first high schoolers to win that tournament. That’s a state amateur’s tournament. It’s a big tournament.”

While Brumlow will have a chance to be the low medalist at the state championship, it’s Cartersville’s depth that makes it a contender for the team title. The Canes’ top seven all regularly shoot in the 70s to low 80s.

Perkins said, as the season’s progressed, Harris’ scores keep getting lower. He’s one of four standout freshmen, including Lawson, Camden Meadows and Jake Wehunt. Henson and Blane Davis are the elder statesmen as juniors.

That depth will allow the Canes to contend for a state title even if one or two of their golfers don’t have low-scoring days, since four scores are counted for the total team score.

“We’re going to fight for the championship. It just depends on how we play that day,” Perkins said. “We’re going to go down for a practice round and see the course. It’s a two-day tournament, so it’ll be more how we play those days instead of just one round. We’ll have to be consistent. I’ve got probably seven kids that can really play. It just depends on how they play that day.”