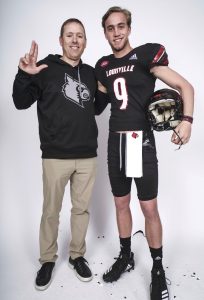 Tee Webb and Louisville made national recruiting news four years ago when then-coach Bobby Petrino offered Webb his first college football scholarship when he was just a seventh-grader.

After several more scholarship offers and a Louisville coaching change, the Cartersville rising senior quarterback’s recruitment came full circle Thursday, when he committed to play for the Cardinals.

Webb made the announcement at around 6:30 p.m. on Twitter.

“Humbled to announce my COMMITMENT to THE UNIVERSITY OF LOUISVILLE! Thank you to everyone who helped me along this journey! GO CANES & GO CARDS!”

Webb visited Louisville this past weekend and had praise for first-year head coach Scott Satterfield, his staff and the program. Satterfield had previously offered Webb when he was the head coach last year at Appalachian State.

According to 247 Sports, Webb was Louisville’s top quarterback target in the Class of 2020. Webb reported 14 other offers, including from Georgia Tech, Miami, Kansas State, Syracuse and Rutgers.

Webb and the Cartersville High football team will begin spring practice for the 2019 season next week. Webb will be entering his second year as the Canes’ starter.

Last year, as a junior, Webb led the Canes to a 14-1 record and an appearance in the Class 4A state championship game. He amassed 2,875 passing yards, 35 touchdowns and 12 interceptions to go along with four rushing scores.

By attending Louisville, Webb would join his predecessor, Clemson signal-caller Trevor Lawrence, in the ACC.