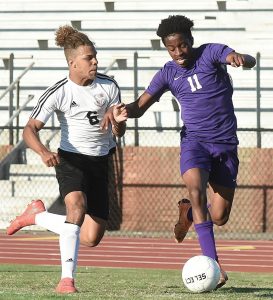 Cartersville’s Pedro Ghanem tries to hold off a Madison County defender during the first round of the Class 4A state playoffs Friday at Weinman Stadium. Cartersville’s win in that game sets up the second-round game at Southeast Whitfield today.
RANDY PARKER/THE DAILY TRIBUNE NEWS
Posted Wednesday, May 1, 2019
BY NICHOLAS SULLIVAN

Before Cartersville and Southeast Whitfield even took the field April 16 at Weinman Stadium, Canes head boys soccer coach D.J. Paradis knew he was about to witness a possible Class 4A state tournament preview.

Cartersville had already been locked into the No. 2 seed from Region 5-AAAA, while Southeast Whitfield was fresh off a victory over its neighbors from the Northwest that clinched the Raiders another Region 6-AAAA title.

The classification’s playoff bracket would potentially pit both programs against each other in the second round, barring an early upset. With that in mind, Paradis understood the importance of his team being able to compete with a top-five ranked team.

The Canes managed to enter halftime tied with the Raiders, but a pair of second-half goals earned the visitors a 3-1 win. Even still, the performance proved to Paradis and Co. that Cartersville could win a rematch, if the opportunity presented itself.

“Played a great game but fell short tonight,” Paradis said via text following the match. “Hope to see them in the playoffs.”

Well, he got his wish. Now, the Canes (8-7) will seek revenge and the quarterfinal berth that would come with a road win over the Raiders (15-4) in tonight’s match in Dalton.

“We’re definitely looking to reverse the roles,” Paradis said. “Southeast is highly ranked, and they already beat us. The pressure is on them to do it again.

“The only pressure we have on ourselves is what we put on ourselves. Our team, right now, is feeling very loose and very confident. They have played their best soccer over their last five games.”

That last sentence would seem to be a strange one for those who just quickly glance at Cartersville’s results this season. The Canes are just 1-4 over their past five games — a stretch that immediately followed a six-game winning streak.

However, a closer look shows that those handful of recent matches all came against playoff teams. Meanwhile, three of those four defeats — the Southeast Whitfield one being the lone exception — were by a single goal.

While the final score hasn’t always reflected it, Paradis believes his team has finally started playing the way it needs to in order to not only defeat the fourth-ranked Raiders but also make a deep playoff run.

“We had a change in formation about midway through the season,” he said. “The guys finally have grasped the full extent of their roles in the formation. They changed to a style of formation that’s not used commonly, so they had to learn new positioning.

“They’ve figured it out. … They’ve learned to defend out of it, and that’s the biggest things, learning how to defend.”

Cartersville displayed great defense in its postseason opener last week, limiting Madison County to just a few chances in a 5-1 victory. The Red Raiders scored on a perfectly struck free kick, but they rarely threatened from open play.

After conceding twice from crosses against Southeast Whitfield, as well as gifting the Raiders a goal on a defensive error inside its own six-yard box, Cartersville’s defense is hoping to redeem itself tonight.

“We know if we had corrected those mistakes, the result could have been completely different the first time around,” Paradis said. “We know, defensively, if we pick up our marks and make the simple play the first time, maybe we’re up 1-0 at the end of the game.

“Our defense is ready to go. They know what they have to do to be in the game for the full 80 minutes and whatever it takes to go after that.”

While the defense will likely be focused on improving its performance from the first meeting, the Canes offense will take solace in knowing they broke through against a stingy defense. Brady Craig’s early strike in that matchup represented the first goal allowed by the Raiders in almost a month.

Southeast Whitfield has 10 shutouts on the season, including a streak of six in a row ended by Cartersville. The Canes will also enter the match as confident as ever in their goal-scoring abilities after bagging a handful in the first round.

Pedro Ghanem and Elian Abeja each scored twice against Madison County before John Robinson added the game’s final goal. Even still, Cartersville spurned a lot of openings in that game, but Paradis said his attacking players are prepared to take their chances tonight.

“Our guys are very confident, especially after the offensive output we just had and how well we played defensively,” Paradis said. “They’re ready to play Southeast Whitfield. They know they have a shot to win this game. They’re going to take every opportunity they can Thursday night to put the ball in the back of the net.”

In a lot of ways, Cartersville is hoping to do to the same thing to Southeast Whitfield that Chestatee did to it last year. Following a stellar regular season, the Canes were primed for a long stay in the playoffs.

Unfortunately, a tough second-round draw led to a heartbreaking 3-2 defeat to the War Eagles. Chestatee went on to finish second in the state, losing to Northwest Whitfield in the championship game.

It was the second consecutive season Cartersville fell to the eventual runner-up, having lost to Druid Hills in the 2017 quarterfinals. Southeast Whitfield won the title that season, and following a stunning first-round upset last year, the Raiders will hope beating the Canes helps fuel a return to the final.

On the other hand, if it can advance to the Elite Eight, Cartersville will certainly fancy its chances of winning another game or two. A victory tonight would ensure a return to Weinman Stadium next week for a Wednesday quarterfinal date with either Region 4-AAAA’s No. 4 seed Luella, due to being the higher seed, or second-seeded Spalding out of Region 2-AAAA, due to the universal coin toss.

That favorable draw is all well and good, but it doesn’t mean much to Cartersville if Southeast Whitfield is the one taking advantage of it.

But there’s no way the Canes are looking past the Raiders. In fact, Cartersville has been looking ahead to this game for more than two weeks now — even before it was official.

Had Flowery Branch pulled a first-round upset instead of dropping a hard-fought, 3-1 match to Southeast Whitfield, Cartersville would be hosting tonight. In some ways, though, Paradis — and probably his players — prefer a highly anticipated rematch.

“We were hoping it was Southeast Whitfield, but we’ll play anybody who’s put in front of us.,” Paradis said earlier this week. “… These guys know each other; we’re familiar with them. We feel very confident that we can be on equal footing with them, when we step on the field.

“We just know we have to take care of the ball, move the ball into space. Defensively, we have to pick up our marks and communicate with each other. We can match up with anyone in the state, when we step on the field ready to go.”