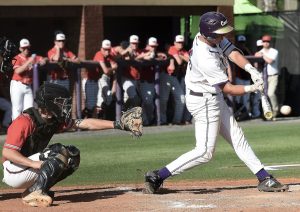 Cartersville senior Jordan Wilkie picks up a hit during Game 1 of the second-round Class 4A state playoff series last week against Flowery Branch. The Canes will take on Northside today in the quarterfinal round at Richard Bell Field with the doubleheader beginning at 4:30 p.m.
RANDY PARKER/THE DAILY TRIBUNE NEWS
Posted Tuesday, May 7, 2019
BY NICHOLAS SULLIVAN

When the Cartersville baseball team reached the Class 4A state quarterfinals in 2018, the Canes matched up against a Spalding side that entered the tournament as a No. 4 seed.

There was no denying that Cartersville lucked out with the best possible draw. Sure, Spalding had gotten hot at the right time, but the Jaguars were barely over .500. After being swept by the Canes, they finished the season ranked 16th in 4A and 123rd in the state by MaxPreps.

This season, Cartersville (28-4) will host another lowly seeded team — No. 3 seed Northside-Columbus — in the Elite Eight. But don’t let the seed deceive, the Patriots are not another Cinderella.

They’re more like Mulan — swift as a coursing river, with all the force of a great typhoon and with all the strength of a raging fire. Yet, they’re still mysterious as the dark side of the moon.

Disney metaphors aside, Northside (26-7) enters the quarterfinals ranked fourth in 4A and 17th in the state, while riding a nine-game winning streak that includes sweeping Eastside and Perry in the opening two rounds.

Cartersville head coach Kyle Tucker expects quite the battle, when the teams open their best-of-three series with a 4:30 p.m. doubleheader today at Richard Bell Field.

“I think, No. 1, they’re really talented, and they’re firing on all cylinders, right now,” Tucker said of the Patriots’ recent success. “Offensively, they’re scoring a ton of runs, and they’re pitching really well. They’re not giving up a lot of runs. They’ve been able to get some big leads here lately. When they get a big lead, they don’t rest on it.

“They put a lot of pressure on you. They have a very potent lineup all the way through. They don’t rely on just two or three guys. Their starting pitching is throwing strikes, and they’re playing really good defense behind them. They’ve not only swept but also they’ve been dominant in all four of their state tournament games, thus far.”

In fact, Northside has pretty much been dominant throughout its current winning run. Since falling to rival Columbus on April 9, the Patriots haven’t had a game closer than a 7-1 victory over LaGrange — a Region 5-AAAA rival of No. 1 seed Cartersville.

Certainly, though, Northside’s most impressive achievement to date came in the first round of the state tournament. As the third seed out of Region 1-AAAA, the Patriots were forced to go on the road to face an Eastside squad with a 23-3 record.

In a span of just a few hours, Northside nearly doubled Eastside’s loss total in a stunning sweep with victories of 8-1 and 10-0.

After the shocking defeats, Eastside head coach Brandon Crumbley was quoted by David Roberts of The Citizens as saying, “I’m gonna tell you right now, that’s a buzz saw of a 3 seed if I’ve ever seen one. That might be the best 3 seed in the entire state.”

While the performance undoubtedly made coaches across 4A stand up and take notice, Cartersville had to contend with its own incredibly talented 3 seed last week in a second-round matchup with Flowery Branch. That came on the heels of a first-round series with arguably the best 4 seed in the classification, Oconee County.

“That grabs your attention,” Tucker said of Northside’s opening-round result. “… They really just kind of took control of both games. They’re a quality baseball team. They’re a team that, when they get out ahead of you, they don’t just put it in cruise control, they keep attacking. We’ve got our work cut out for us, for sure.

“It’s been a tough road for us. We felt like we had a tough 4 seed, then a tough 3 seed in Flowery Branch, and then here comes another 3 seed. But at this point, that doesn’t matter at all; seed doesn’t matter at all. There are eight teams left, and all eight can win it. They’re all battling, and the two of us are battling to try to get to the series next week.”

For the Canes to be able to return to the Final Four for the second consecutive season, they will need to continue to get stellar pitching from Mason Barnett, Logan Martin and Gage Morris. The trio have combined to throw every pitch in Cartersville’s four postseason games.

A two-run bloop single in Game 2 against Flowery Branch are the only runs the team has given up in the playoffs. The hit actually ended a streak of five consecutive shutouts and seven games in a row with no earned runs allowed.

While acknowledging the outstanding athletes at his disposal, Tucker gave a lot of the credit for the staff’s success to first-year pitching coach Asa Williams.

“He’s a Cartersville guy that played for us back in the early part of this decade. He went and played at Reinhardt. We got him on staff a year ago, and we moved him to the pitching coach role this year,” Tucker said of Williams. “He’s super sharp and uses sort of a cerebral approach to how to plan for these pitchers to be pitching well now. … He’s brought kind of a different approach to things. The players really bought in.

On the other side, Northside’s pitching is a bit of an unknown commodity — really the whole team is somewhat of a secret. While Flowery Branch boasted a pair of pitchers with fully drawn out Perfect Game resumes, there is limited information available on the Patriots’ top two arms.

Based on his limited public PG profile, senior Colton Joyner stands at 6-foot-4, 220 pounds and can hit 86 on the radar gun. The right-hander has been Northside’s Game 2 starter in the playoffs with sophomore Conner Sizemore taking the mound in the series openers.

Sizemore pitched a complete-game gem in a Game 1 victory over Perry in the second round. The 5-foot-6, 130-pounder can run his fastball up to 84 MPH, according to PG. Overall, the Patriots have outscored their opposition 37-5 in the postseason.

Even still, Tucker believes his players will enter this series with the perfect balance of confidence in themselves and respect for Northside.

“You have to play the game of baseball with a little bit of confidence, but there’s a fine line,” he said. “You don’t want to be cocky; you don’t want to be overconfident or disrespect the game, disrespect any opponent. I don’t think our guys will do that. We’ve played some really good teams, battled and had a lot of close games. I do think that helps. We have another really good team coming in. By all accounts, they’re well-rounded in all they do. They’re fast; they hit; and they pitch.

“Our guys know what’s at stake, but they’re excited about it, looking forward to it. That’s why you sign up to play. You hope to have some success in the state tournament and get to play in a series like this. Once you get to the Elite Eight of the state tournament, the team on the other side is obviously going to be pretty good — otherwise, they wouldn’t have made it that far.”

Despite saying he thinks Cartersville’s previous tough encounters, including wins of 2-0 and 3-2 last week, could pay dividends, Tucker made sure to point out that those tight wins don’t directly count for anything today.

State tournaments, particularly in a sport like baseball, are never going to be straight chalk. If they were, the Patriots wouldn’t have made it this far. For that matter, Northside would have met Cartersville in the Elite Eight last year — instead of suffering a surprise first-round sweep against Spalding.

“It’s good to know we’ve been there and done it, but at the same time, when we start at 4:30 on Wednesday, all of that kind of goes out the window,” Tucker said of the earlier close games. “It’s going to be two teams that really want to advance to the Final 4, and they’re going to battle as hard as they can.”