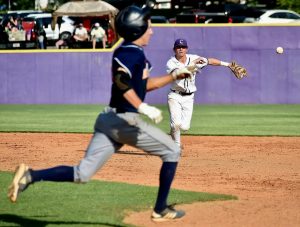 For most of the 2019 season, the Cartersville baseball team struggled to hit with runners in scoring position. More often than not, the Canes got enough top-notch pitching and great defense to overcome any offensive droughts, entering the Class 4A state quarterfinals with a 28-4 record.

Wednesday, though, the pitching and, particularly, the defense failed to live up to Cartersville’s standards, as Northside-Columbus rolled into town and swept the Canes by scores of 3-1 in 10 innings and 4-2 at Richard Bell Field. The games marked the end of another stellar season for Cartersville, but it was another year without a successful end to the search for the program’s seventh state title.

“I just tell them that I love them, and I’m proud of them,” Canes head coach Kyle Tucker said of his postgame message. “It’s not a fun conversation. It’s going to sting tonight, it’s going to sting tomorrow and it’s going to hurt for a while, but they’re able-bodied young men who have put in a lot of work for this school and this program, and they’ve done everything we’ve asked them to do. …

“They wanted like crazy to put a sign on that fence, but it’s not going to happen in 2019. I don’t want them to let that define them. We’ve been playing baseball here 70 years, and only six out of 70 have won the tournament. It’s hard to do.”

In an otherwise dead-even Game 1, Cartersville’s surprisingly poor defense proved to be the difference. The Canes committed five errors, although one of those was initially ruled a hit before being changed.

Miscues gifted Northside (28-7) a golden opportunity to take the lead in the fourth inning, but a Preston Welchel-to-J.P. Martin-to-Cohen Wilbanks relay cut down a Patriots runner at home. Mason Barnett wound up escaping a bases-loaded jam later in the inning.

Northside, though, struck in the top of the fifth with Cartersville providing a helping hand. The leadoff hitter reached and advanced to second base on an error. In the span of just a few off-target pitches — a wild pitch followed by a passed ball — the runner moved up to third, and then he scored without a play at the plate.

The Canes’ deficit — their first in the playoffs — didn’t last long. For the second consecutive inning, Cartersville put runners on first and second with one out only to see a grounder hit to the second baseman.

Unlike the previous frame, when Northside turned an inning-ending double play, a throwing error by the shortstop allowed Brant Smith, who singled earlier in the frame, to scamper home.

While both team’s pitching deserves credit for putting up enough zeros to send the game 10 innings, each side will feel that it wasted plenty of scoring chances. Cartersville, in particular, struggled mightily with runners in scoring position over the final few frames.

In the bottom of the seventh, eighth and ninth innings, Cartersville put the potential winning run on base. Every time, the Canes stranded the runner(s) in scoring position to let the Patriots off the hook.

“In that first game, we had so many chances. That’s kind of been our bugaboo all year. We’ve tried like crazy. We’ve practiced it; we’ve repped it. But sometimes, you just have to give the other team credit.”

Eventually, Northside scratched out a run against Gage Morris. After coming on to replace Barnett prior to the sixth inning, when it appeared Barnett tweaked his back during warmup pitches, Morris proceeded to put up four shutout innings.

In the 10th, a pair of singles with one out put the go-ahead run in scoring position. On a two-out hit to right field, Kolby Adams, who saved Game 2 of the Sweet 16 with a game-ending catch in the corner, tried to field quickly to throw the runner out at home.

Instead, the ball got under his glove, allowing another run to score for a 3-1 lead, while catcher Connor O’Neal managed to advance all the way to third base. Morris stranded the runner, but the damage had already been done.

With their Nos. 2-4 hitters due up in the 10th and Northside starting pitcher Colton Joyner finally out of the game after nine stellar innings, Cartersville hoped to answer back.

Preston Welchel looked to have possibly had a one-out double down the right-field line. However, the first-base umpire called the ball foul, much to the chagrin of the Cartersville players, coaching staff and fans.

Welchel ended up popping out, and Barnett, who encouragingly returned to hit in his original spot in the batting order, lined out to send Northside to a fifth win in as many postseason games.

Ian Inaba led the Canes with two hits in four trips, while Smith finished 1-for-2 with a walk and a run scored. Welchel also had a hit and a walk. Overall, Cartersville was outhit 11-8, but the biggest discrepancy came in the errors column with Northside making just the one defensive miscue.

Barnett and Morris each pitched five innings with no walks between them. The former struck out five and allowed the same number of hits. The latter gave up six hits with four punchouts.

Despite the heartbreaking defeat in Wednesday’s opener, the Canes started out well in Game 2. Playing as the visitors on the scoreboard, Cartersville ran up Northside starter Conner Sizemore’s pitch count early.

In the second inning, Barnett drew a walk before benefitting from a wild pitch and passed ball to incrementally move up to third base. Inaba drove him home with an RBI groundout.

Martin followed with a double down the left-field line, and Smith drove him in with a single. A throwing error allowed Cartersville to extend the inning, but Sizemore escaped further damage and went into cruise control.

“I thought our guys did a great job coming out focused and ready to go,” Tucker said.

Northside finally answered in the fourth inning with the help of some more uncharacteristic defending. An offline throw by  Josh Davis on a potential double play let one run score, and a wild pitch immediately after allowed the Patriots to knot the game at 2-2.

“Play’s that we’ve been making, we didn’t make,” Tucker said. “You’ve got to make them, if you want to keep advancing.”

A hit batsman, sacrifice bunt and wild pitch put Northside in business in the fifth inning. With the infield drawn-in, J.P. Martin snagged a grounder at first base, but the go-ahead run scored as he ran to first base to record the inning’s second out.

The Patriots tacked on an insurance run in the sixth frame. Logan Martin walked the leadoff batter before being replaced by Morris. A fielder’s choice groundout allowed the runner to advance to second, and a single to left field brought him home.

Down to its final strike, Cartersville managed to get the tying run to the plate, as Davis reached on a hard-hit ball to shortstop. Wilbanks followed with another ball to short, and even though he bobbled it initially, Clayton Weaver fired it across the diamond to record the final out.

“Take nothing away from Northside, but we didn’t feel like we played our best,” Tucker said. “You have to, especially this deep. That’s the part that’s tough.”

The loss ended the hopes of Cartersville’s first state title since 2013. After finishing runner-up last year, the Canes large group of seniors — which encompassed the entirety of the everyday starting lineup, save for Davis — came up a few rounds short of their goal to return to the championship series and win it all.

“They carried on the legacy of Cartersville baseball like we think every class should,” Tucker said. “You reset every year. The seniors, it’s their last shot, so the focus is always on them, because it’s their year, so to say. …

“Obviously, we wish we were still playing next week.”