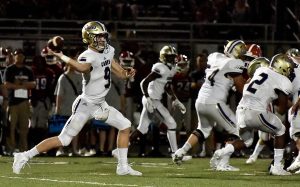 Cartersville High quarterback Tee Webb throws a pass during the game at Allatoona on Aug. 23. The Canes will look to move to 2-0 Friday in their home opener against Luella.
RANDY PARKER/THE DAILY TRIBUNE NEWS
Posted Thursday, September 5, 2019
BY NICHOLAS SULLIVAN

Barring something unforeseen, the Cartersville football program will earn another win during Friday’s game at Weinman Stadium.

A victory over Luella would be a historic one, not because there’s any significance to beating the Lions, in particular, but the win would be the Canes’ 50th consecutive in the regular season.

The streak of 49 straight regular-season wins stretches back to Sept. 12, 2014. On that date, Cartersville defeated North Paulding by a 26-7 final score. The victory came in Trevor Lawrence’s first career start.

There have been several blowouts during that span, and Friday night seems like it will be another. The Canes won last season’s matchup by a 55-3 margin, taking a 55-0 lead into halftime after scoring on every first half possession.

“We hope that we’ll have the opportunity to play a lot of people Friday night,” Cartersville head coach Conor Foster said. “Regardless of who’s in the game, we have high expectations. They’re a part of something special, and with that comes high expectations. We believe whoever is in the game can execute at a high level.”

Plenty of eyes will be focused on the Canes offense to see if that side of the ball is able to build some confidence and momentum. Cartersville (1-0) sputtered against Allatoona for most of the night but made just enough big plays to pull out a 14-13 win in the season opener on Aug. 23.

“Looking to continue to build confidence and looking to figure out exactly what our bread and butter is going to be,” Foster said of how the offense has spent the bye week. “I think that we’ve settled in on that. This past week has allowed us to focus in on who we are and who we’re going to be. …

“I was really proud of the ownership of our leaders in the program, who stepped up and said, ‘We have a lot of work to do. Let’s make sure we’re taking advantage of this opportunity.'”

After the scrimmage against Dalton, when the offense started slowly, and following the win over Allatoona, Foster didn’t seem worried about that side of the ball in the long term. He reiterated that Thursday, but he did make it known that there has to be progress made.

“It’s early in the year, and we’ve played one football game,” Foster said. “There’s a lot of improvement to be made on both sides of the ball.

“There’s certainly not any panic on my end. There’s excitement about what we can be. But we need to have a great sense of urgency to execute at a high level right now, so that we can continue to improve.”

Defensively, the Canes played outstanding against the Buccaneers. When considering the team was missing three starters, the performance becomes exponentially more impressive.

One of those players, Harrison Allen, is expected back this week. The junior saw time on both sides of the ball last year against the Lions, but he might be limited to playing linebacker this time around if the coaches decide to ease him back into action.

However, it appears senior safety Marko Dudley and junior linebacker Jaylon Akins will both sit out the game.

“We should get Harrison Allen back Friday night, but we’re still not there with a few of the guys,” Foster said. “We’re always going to err on the side of caution with our young me. Their health is the most important thing to us. In the end, it helps us develop depth. It will make us a better football team to play a lot of people, rotate a lot of people and figure out what we’ve got.”

There should plenty of time to rotate players Friday night with Luella (0-1) a 41-point underdog, according to Maxwell Ratings. The Lions dropped their season opener last week to Trinity Christian, 18-6. Luella finished 3-7 last year, but the 311th-ranked team in Georgia, per MaxPreps, will likely have a hard time hanging with the state’s ninth-ranked squad.

The Lions are entering the second year under Jason Jackson — a former Canes assistant coach.

“Coach Jackson does a good job,” Foster said. “… They do a good job with the kids that they’ve got. They put them in good positions to be successful. I look for a well coached team for us to play against Friday night.”

Foster will be making his official home debut against Luella. He’ll probably hope for a more straight-forward win than he had in his first game in charge of Cartersville.

Either way, Foster is looking forward to his players putting on a patented Canes display in front of a solid Weinman Stadium crowd.

“As a coaching staff, we try to remind our players about leaving a legacy and leaving an impression on our young people in the stands,” Foster said. “Showing them the right way to play the game, with integrity, great passion, great effort and great sportsmanship. For us, all of those things are very important, when we get to play in front of our home crowd.

“I just hope we’ll pack these stands out and really support these young men.”