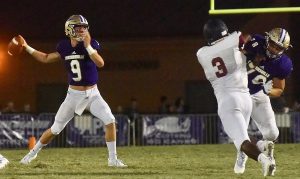 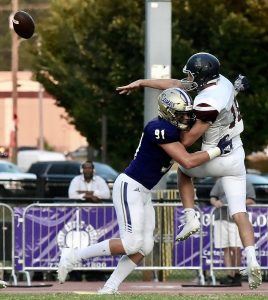 Fridays at Weinman Stadium have been mostly about blowout wins in recent years. That made it fitting that Cartersville routed visiting Luella by a 47-0 margin this Friday to mark the 50th consecutive regular-season victory by the Canes.

During that span, Cartersville has now produced 23 wins by at least 30 points — and that’s just at home. However, this one was the first of the Conor Foster era, as the Canes defensive coordinator for the entirety of the winning stretch made his official home debut in charge of his alma mater.

The overall streak, which not so coincidentally began with Trevor Lawrence’s first start against North Paulding in 2014, was never in doubt on this occasion. Junior Devonte Ross made sure of that, returning the opening kickoff roughly 85 yards for a touchdown and a quick 7-0 lead.

“I didn’t know what to expect, when I picked it up, because it bounced,” Ross said. “I was supposed to go right, but I saw a hole up the middle was wide open so I just hit it as hard as I could. I saw a defender. I knew once I got past him, it was just me and kicker. I knew he wasn’t going to tackle me.”

Cartersville’s offense technically didn’t have to score the entire game with the defense shutting out an opponent for the 18th time since Foster joined the staff. But the Canes (2-0) made sure to leave little doubt as to how dominant their offense can be after struggling against prominent Class 6A programs Dalton — in a scrimmage — and Allatoona in the season opener on Aug. 23.

Under the direction of senior quarterback Tee Webb, Cartersville put together a methodical opening possession. The seven-play drive included four first downs and culminated in a 7-yard touchdown run by Quante Jennings on his first carry of the game.

Following a great punt return by Marquail Coaxum and a penalty on the play by Luella (0-2), Cartersville needed just 24 yards to find the end zone for a third time. Webb finished off that series himself, pirouetting into the end zone for a 20-0 lead.

“It was nice having a rhythm early, for sure,” Webb said. “Devonte kind of started it off for us with that kick return, which was a big momentum shift for us. It was a lot of fun, but we just tried to settle down and play our game.”

Jennings capped the Canes’ first quarter scoring with a 5-yard run. Andrew Elizalde converted his third of five point-after tries for a 27-0 lead after one period.

After focusing on quick passes throughout the first quarter, Cartersville started to open things up in the second, with Webb just missing Ross on a deep ball on the Canes’ first snap. Two plays later, though, the preseason all-state signal-caller hit Coaxum down the right sideline for a 69-yard touchdown.

“I was reading the backside safety and saw that he was standing in the middle of the field,” Webb said of the his first TD pass. “I had a one-on-one matchup with ‘Quail, and I trusted my guy to go get it.”

On Cartersville’s next possession, the Canes opened up with a quick pass to Evan Slocum. They followed it up with a fake to Slocum on the same route, and a beautifully thrown ball down the left sideline that Ross hauled in for a 57-yard score.

“We had thrown the play before to Evan, and the safety had come down,” Webb said. “We decided to pump [fake] and get one over the top.”

Initially, it appeared the touchdown would come off the board with a flag thrown on the play. The officials, though, got together and ultimately waved off the penalty to allow Cartersville a 40-0 halftime lead.

The bomb to Ross was the final snap of the game for Webb and several other starters. The Louisville commit finished 10-for-11 passing for two touchdowns and added one rushing. Webb totaled 201 yards on the night with 189 coming through the air.

Ross finished with four receptions for 86 yards and one score, while adding the special teams touchdown. Jennings only had five touches (four carries) but racked up 45 yards and his two short TD runs.

“We went back to our basics this week,” Ross said. “Making sure we did our short passing game and making sure we’re getting our playmakers the ball.”

While the offense was certainly expected to look better against an overmatched Lions team, the Canes used a game plan that — when executed properly — would trouble even the toughest Class 4A teams in the state.

“It was a lot of little things we cleaned up through our film work and practice through the last two weeks,” Foster said of the offensive improvement. “Coaching staff did a great job of focusing on who we want to be and getting good at what we do.”

A similar scheme — or any scheme, frankly — should lead to another lopsided win next week, when McNair comes to town. Cartersville produced the third-highest margin of victory in program history in last season’s 70-0 walkover.

Then again, dominant wins are becoming the norm for fans who attend Canes games, particularly inside their friendly confines.