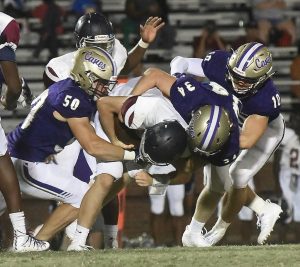 Cartersville defenders Alan Thacker (50), Peyton Lewis (34) and Harrison Allen (10) combine to bring down a Luella player during Friday’s game at Weinman Stadium. Allen saw his first action of the season after missing the team’s scrimmage and season opener due to injury.
RANDY PARKER/THE DAILY TRIBUNE NEWS 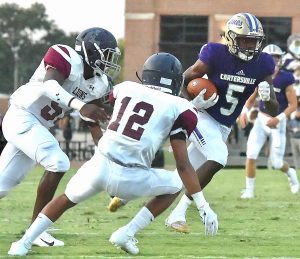 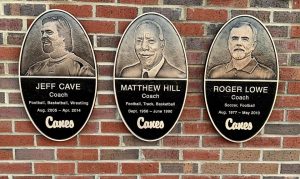 Although the initial class included just a trio of former coaches, it was announced that the award would “recognize and honor outstanding achievements of individual athletes, coaches/administrators and teams of Cartersville High School who have contributed to the integrity, promotion and growth of athletics.”

Hill spent 32 years in the Cartersville School System as a teacher, coach and assistant principal. He also served 12 years on the school board.

Lowe is most well known for his work as a soccer coach for the Canes. For more than 30 years, he coached the boys and helped bring about the start of the school’s girls program.

Cave coached football and wrestling for the Canes, even while battling cancer. He is remembered annually through the Jeff Cave Scholarship, which is awarded to one male and one female senior.

Each honoree was memorialized with a plaque unveiled underneath the Cartersville scoreboard.

INJURY ISSUES CONTINUE — The Cartersville football team had three honorees on the AJC preseason all-state team. Only one of those three players has played in both of the Canes games, thus far.

Senior defensive back Marko Dudley hasn’t seen the field in either contest or the scrimmage. Offensive lineman Jonah Gambill played in the scrimmage and the opened against Allatoona, but the senior Memphis commit sat out Friday’s win over Luella. Senior quarterback Tee Webb has been the only one of the trio to not be bitten by the injury bug.

Neither Dudley nor Gambill was dressed out Friday. The latter was seen roaming the Cartersville sidelines with his right arm in a sling. Canes head coach Conor Foster said Gambill’s injury was to his arm, as opposed to the shoulder, and didn’t seem concerned.

Gambill and Dudley weren’t the only Canes regulars missing the game. Linebacker Jaylon Akins remained out with a shoulder injury suffered in the scrimmage against Dalton. However, fellow inside linebacker Harrison Allen made his return against Luella, albeit in a seemingly limited capacity.

While injury woes are never welcomed, optimistic Cartersville fans would point out that it’s better to have them early in the season.