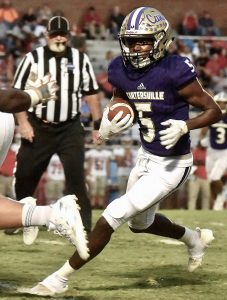 Cartersville junior Devonte Ross runs with the ball during a game against Cedartown on Sept. 27 at Weinman Stadium. The Canes will go on the road Friday to take on LaGrange.
RANDY PARKER/THE DAILY TRIBUNE NEWS
Posted Wednesday, October 9, 2019
BY NICHOLAS SULLIVAN
The theme of the week for the Cartersville football team is “resilience.” But frankly, resilience has been the theme of the entire season for the Canes.
A banged up group has been forced to scratch and claw for almost every win this season. Outside of games with overmatched Luella and McNair, Cartersville has needed to make some key plays in the second half every time out to remain undefeated. Last week was no different with the Canes gutting out a 16-14 road win over Central, Carroll.
With several prominent players forced to nervously watch the latest tight game from the sideline, Cartersville head coach Conor Foster felt it fitting that resiliency was the team’s topic of the week.
“We had some really good conversations about resiliency and what that looked like individually and collectively,” Foster said. “… I’m very proud of how our kids have come out and responded with three great practices.”
As for what the Canes (6-0, 2-0 Region 5-AAAA) needed to work on after holding on for a narrow win over a now-.500 Lions team, Foster said the struggles came from both sides of the ball.
“Defensively, we talked about being more physical up front and limiting big plays,” Foster said. “On the two scoring drives, they had a long touchdown on one, and on the other, they had a third-and-19 that they converted. We pride ourselves on limiting big plays, and in those two instances, they cost us. …
“Offensively, finishing blocks and continuing to execute better. As we got tired, some of the busts were a little more prevalent. Taking care of the football is the No. 1 thing, and then finishing blocks and finishing drives.”
While Cartersville fans are generally used to seeing one-sided showings, last week marked the fifth time in the past two seasons that the Canes played a one-score game. Cartersville is now 5-0 in such contests.
“I think it speaks to the character of the team and the expectations of the program,” Foster said of the team’s success in close games. “Our kids have been in a bunch of tough battles, a bunch of dogfights. In the end, they trust the work that they’ve done, they trust the coaching that they’ve received and they believe they’re going to find a way to make a play. They don’t get down, they don’t pout and they don’t make excuses. There was a tremendous amount of ownership from our kids throughout the game.”
The Canes and their traveling fans will hope to see the team return to its dominant ways in Friday’s road game against LaGrange (2-3, 0-2) at Callaway Stadium. (And not just in hopes of getting back home sooner due to a running clock.)
The Grangers will enter Friday’s contest after taking a 51-6 beating at the hands of Cedartown, a team Cartersville beat 24-2 on Sept. 27. However, the last time LaGrange played at home, the Grangers lost a tight one, 17-14, to Central.
“They’re in Year 2 under the current coaching staff,” Foster said of LaGrange. “I’ve seen a lot of improvement, as far as Xs and Os and scheme. They’re a zone-heavy team offensively. The quarterback really spins the ball well. He gets it out and holds you accountable on the perimeter with some RPOs. They’ve got some athletic receivers and a big running back about 220 pounds who is very physical. He really reads the zone blocking well.
“Defensively, they mix it up, which is always tough. They have a four-man front, and they can get in a 3-3 stack. They keep you on your toes and try not to let you get comfortable. They’re a program that’s moving in the right direction for sure.”
While the expectation would be for Cartersville to bounce back in a big way this week, the Canes shouldn’t be surprised to find tough sledding again in the region. In its first two games in the league, Cartersville held leads of 10-2 and 3-0 at halftime.
Foster will definitely be looking for a quicker start this week.
“Everybody in our region has elite athletes, and this Friday will be no exception,” the first-year head coach said. “They can beat you if you don’t come out and play your best game. We need to come out and start with better energy, better focus and intensity. We certainly have to go out and execute at a higher level, otherwise we’ll be in for another fight, for sure.”
Cartersville should enter this week’s bout at least as healthy as last week. While things could change before Friday’s kickoff, Foster doesn’t believe the Canes will be any more shorthanded this time out.
“We escaped mostly unscathed,” he said. “We had a couple more with some nicks we think are going to be fine.”
Regardless of the injured list entering the matchup, Foster will have confidence in whoever lines up for Cartersville. It’s been hard to find the right mixture at times with so many players flowing on and off the field, but the Canes have performed well enough in tough spots to earn their head coach’s trust.
“We’ve had so many injuries, and they affect you in all three phases of the game,” Foster said. “To see guys step in and be prepared, it’s been different guys every week to step up and make big plays. …
“It’s been very humbling to see the character of our football program in the face of adversity.”
Purple Hurricanes Official Sponsor