Posted Wednesday, October 30, 2019
STAFF REPORT
Softball in Bartow County certainly appears to be on the upswing. The sport is arguably one of the county’s best across the board, and with only a few key seniors sprinkled throughout the four teams’ rosters, the future appears increasingly bright.
Cartersville finished with a winning record (14-13). The Canes, though, fell just shy of their goal to making it to the Class 4A state playoffs. Boosted by an impressive collection of freshmen, Cartersville improved greatly, and depending on how reclassification shakes out, the Canes should continue to push for postseason berths in the coming years.
Hitter of the Year: Lauren McElhaney, Cartersville senior 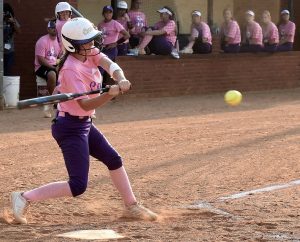 RANDY PARKER/THE DAILY TRIBUNE NEWS
This is honor is to reward McElhaney for what she did with her bat, but that doesn’t seem quite fair considering there really isn’t anything McElhaney doesn’t do well on the softball field. As a catcher, she did a great job helping lead a team that relied almost exclusively on three freshman pitchers. As a baserunner, McElhaney went a perfect 11-for-11 on stolen-base attempts. As a hitter, all she managed to do was rack up 24 RBIs and 23 runs scored with a .438/.490/.629 slash line. One-third of her hits went for extra bases, as she totaled 10 doubles, 2 triples and an inside-the-park home run, which came in her final game for Cartersville.
ALL-COUNTY TEAM
Anna Kate McElhaney, Cartersville junior — Remarkably, the younger McElhaney wound up with the exact same batting average as her sister. She even posted a higher on-base percentage, as boosted by 13 walks. Even though 32 of her 35 hits were singles, McElhaney managed to drive in 27 RBIs — triple her 2018 total — and also scored 15 times. After pitching quite a bit in 2018, a crop of freshmen hurlers allowed McElhaney to focus more on offense this year.
Campbell Rogers, Cartersville freshman — One of the key members of Cartersville’s heralded freshman class, Rogers hit the ground running with a .425/.470/.521 triple-slash line. Asked to bunt and play small ball a lot, Rogers only had five extra-base hits and four walks, but her ability to make contact is second to none. She finished the season with 25 runs scored and 15 RBIs. Her defense, though, was arguably even more impressive, as she posted a .952 fielding percentage.
Cio Seigler, Cartersville senior — After a rough opening two weeks, Seigler slugged her way to a .362/.439/.603 line over the final 20 games of the season. Overall, she hit .329/.402/.512 with seven doubles, a triple and two home runs. Seigler wound up with 21 runs scored and 16 driven in. She did everything she could to try to push the Canes into the state playoffs with a key two-run homer to give her team the lead in a Region 5-AAAA tournament win over Chapel Hill.
HONORABLE MENTION
McKinley Chada, Cartersville freshman; Elizabeth Nelson, Cartersville freshman; Hope Short, Cartersville senior
Feb
27