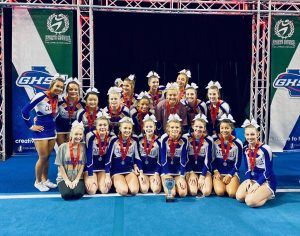 Cartersville head competition cheer coach Breanna McDonald said she thought the Class 4A state title would come down to her team and Denmark for the second straight season.

That proved to be the case, but unlike 2018, when the Canes edged out the Danes for the championship, Cartersville had to settle for second place. After beating the Danes by a single point last season, the Canes fell five points (92-87) shy this time around.