Canes force 5 turnovers in 2nd half to hold off Falcons 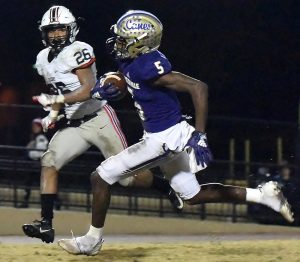 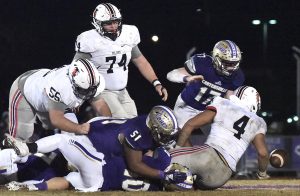 A week after allowing 35 points in a win over Troup County, the Cartersville defense held Flowery Branch scoreless in the second half, forcing five turnovers over the final two periods.

The huge plays were all necessary as the Canes held on for a 14-6 win in the opening round of the Class 4A state playoffs Friday at Weinman Stadium. Next Friday, the top-ranked Canes (11-0) will host Thomson in the second round. It will be a rematch of the 2016 state final that Cartersville won by a 58-7 final score.

“I’m really proud of them,” Canes head coach Conor Foster said of his defense. “They made a lot of huge plays, created some big turnovers. Different guys stepped up and stepped in. We had a couple banged up. It’s kind of been the story of our season: perseverance, overcoming injuries and next-man-up mentality.

While each of the five turnovers was massively important, the most impressive of the bunch also happened to come inside the game’s final 90 seconds to help seal the victory.

As the Falcons (7-4) faced a third-and-10, junior safety Kolbe Benham leapt up as he fell backward to haul in a gorgeous interception at the Canes 41-yard line with 1:25 to go. It was the second turnover forced by Benham after he punched a ball free on the previous series, leading to a Marquail Coaxum fumble recovery.

Benham wouldn’t normally have been on the field in either situation, but an injury to starter Marko Dudley thrust the sure-handed receiver into the defensive lineup.

“It’s always big to help out a teammate,” Benham said. “But it’s even more special to me to help out Marko because of all he’s been through. I feel good just backing him up, because he’s so great.”

Foster was impressed with Benham’s clutch performance. His ability to fill in for Dudley, who appeared to re-aggravate a nagging shoulder injury, epitomizes what the Canes have been able to overcome this season.

“He works every day in practice,” Foster said of Benham. “Doesn’t always get the credit on defense but always understands that he’s one play away [from playing]. Just to see him jump in and be ready to go when his time came — and to be communicating with Marko about what he was seeing and what was going on — speaks volumes to his maturity.”

Flowery Branch, which finished fourth in a rugged Region 7-AAAA, received the opening kickoff in the second half, looking to overturn a 7-6 halftime deficit. Instead, the Falcons began a dangerous second-half trend.

With possession near midfield, running back Jaizen Ellingham, who scored the team’s only points on a touchdown late in the first half, coughed up the ball. Devonte Ross fell on it, and one play later, Cartersville quarterback Tee Webb threaded the needle on a pass to Ross, who turned on the afterburners, for a 49-yard touchdown.

“Big plays are certainly a big part of our offense, trying to give our guys some shots,” Foster said. “… We’ve got some big-time guys. Tee trusts them, and we trust Tee. We’re going to keep going after them and staying aggressive. I was proud of Tee.”

Oscar Hernandez nailed his second extra-point attempt for a 14-6 lead. However, his ensuing kickoff was returned all the way to the Canes 19, gifting the visitors a golden opportunity to possibly tie the game.

But a holding penalty and a takedown behind the line of scrimmage by Omari Bailey forced Flowery Branch into a third-and-long situation. Quarterback David Renard floated a deep ball that Dudley hauled in near the goal line for a pick.

The Falcons would settle for a punt on their next drive before turning the ball over on their final three possessions. A fumble recovery by La’Kwayme Jupiter early in the fourth quarter preceded Benham’s two big defensive plays.

Benham, though, also had a huge play on offense just moments after Jupiter’s recovery. He hauled in a 20-yard pass on third-and-20 to extend a drive.

Cartersville, which won its eighth straight region title this year to claim a No. 1 seed, ultimately drove down inside the Flowery Branch 5-yard line. With the Canes set to put the game away, the Falcons stiffened up to force a turnover on downs.

It was the second time Friday that Cartersville had failed to convert in the red zone. With 1:53 left in the first quarter, the Canes looked set to take a two-possession lead only to fumble the ball on first down at the 19-yard line.

Flowery Branch took advantage of the missed opportunities to hang around. The Falcons also benefitted from three penalties on the Canes, including two 15-yard facemask calls, to put together their scoring drive.

Ellingham carried the ball 10 times on the series, grinding out tough yards before breaking around the left side for a 5-yard touchdown. The point-after try was no good, leaving Cartersville up 7-6 with 1:42 left in the first half.

The Canes threatened to score before the halftime whistle. Big plays by Quante Jennings and Sam Phillips, who finished with 121 and 48 yards, respectively, pushed Cartersville to near midfield before four straight incompletions forced a punt.

It meant the only Canes touchdown of the first half came on a great individual play by Kyler Johnson. The junior, who finished with four catches for 46 yards, soared into the air and reached over the top of a helpless defensive back to snare the ball for a 26-yard touchdown.

The impressive scoring play capped the game’s opening drive. While Cartersville’s offense struggled to finish off sustained series the rest of the night, Foster believes his unit will bounce back next week — just like the defense did on this occasion.

“I think we’ve got some little things that we’ll go in and evaluate on film. Our guys will be hungry for the challenge next week.”