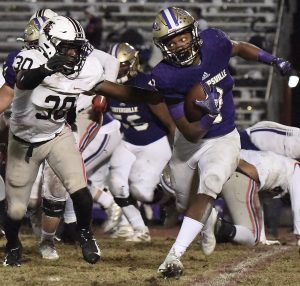 Cartersville junior running back Quante Jennings (2) looks to avoid a Flowery Branch defender during Friday’s 14-6 win at Weinman Stadium. The win kicks off what could be a tough path for the Canes in pursuit of a state championship.
RANDY PARKER/THE DAILY TRIBUNE NEWS
Posted Saturday, November 16, 2019
BY NICHOLAS SULLIVAN
ONE DOWN — There’s no two ways about it. If Cartersville is going to win the football program’s fifth state title this season, the Canes are going to have to earn it.
No, I mean they are going to have to earn it.
Unless chaos starts to reign in the Class 4A state playoff bracket, top-ranked Cartersville will likely have to beat three teams ranked inside the top five in the classification over the next four weeks to win the championship.
If that seems ridiculous, add in that the Canes have already beaten a Flowery Branch team that entered the postseason tied for 11th in 4A. There’s tough draws, and then there’s what Cartersville could potentially face the next month.
After a second-round meeting with Thomson, which MaxPreps ranked 18th in 4A entering the state tournament, Cartersville could face fellow No. 1 seeds Woodward Academy (No. 2 in 4A composite) and Blessed Trinity (tie-No. 3) in the quarterfinals and semifinals, respectively. Both of those games could possibly be on the road, depending on the result of the GHSA coin flips.
Should Cartersville reach the state finals, the team will more than likely face either Sandy Creek (No. 5) or Marist (tie-No. 3) for the crown. Neither of those teams won their region, but each finished runner-up in arguably the toughest region in the classification.
Cartersville’s opening game certainly prepared the Canes for the upcoming gauntlet. An assistant coach for the local team quipped after the 14-6 victory, “That’s a third-round opponent.”
For most teams, maybe, but with Cartersville’s luck this season, Flowery Branch was just the appetizer for what could be a very filling (and possibly fulfilling) holiday feast.
Purple Hurricanes Official Sponsor