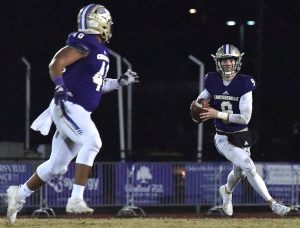 Half of the Bartow County football teams made the state playoffs, but only half of that group will be moving on to the second round.

Meanwhile back in Bartow, Cartersville got all it could handle from a tough Flowery Branch side. The Canes got just enough offense and more than enough defense to reach the second round with a 14-6 win.

Now 11-0, Cartersville, which finished as 4A runner-up last season, will host Thomson Friday at Weinman Stadium.

PLAYER OF THE WEEK

Webb didn’t light up the scoreboard Friday in the way that he has many times though his two seasons as Cartersville starting quarterback. Then again, it’s the steadiness that the Canes have needed more so than the otherworldly plays that helped earn a victory.

He completed 23 of 36 passes, but if you remove four straight incompletions to end the first half, Webb connected on nearly 75 percent of his throws. The senior wound up with 281 yards through the air — the fourth time in five games he has topped 275 passing yards. He had a 26-yard touchdown pass to Kyler Johnson and a 49-yard score to Devonte Ross.

The numbers are particularly impressive considering how much pressure Webb faced in the game. He took several sacks but escaped pressure even more often. Even though both touchdown passes included great individual plays by his receivers, Webb deserves credit for giving Johnson a chance on the jump ball and Ross caught his TD in stride before flashing his outrageous speed.

His ability to know exactly where the line of scrimmage is allows him to keep plays alive, although there seemed to be a few instances where tucking the ball would have been the better option, which also would have given him the chance to show off his speed the way he did on his 53-yard touchdown run against Troup County.

For the Canes to make it through a potentially loaded upcoming schedule, Webb will have to be able to balance a cautious approach with his ability to take shots when the moment calls for it.

The junior made some of the biggest plays of the game to help the Canes advance. He had two 20-yard catches and forced a pair of turnovers in the victory.

Benham showed off his great hands on his first 20-yard pickup. His second came on a third-and-20 to extend the drive. He added a short catch, ending with three receptions for 42 yards.

His most important contributions, though, came on defense. Filling in for an injured Marko Dudley, Benham forced a fumble and picked off a pass — another outstanding catch. Those plays ended the final two Flowery Branch possessions of the night.

After making his return from a five game absence last week, it was anticipated that Jennings would take a big step forward in the first round of the playoffs. He certainly did that.

Although, he was just a couple of turfmonsters, as Jack Howell calls them, away from breaking off some long touchdowns, Jennings still managed to rack up 81 rushing yards and 35 rushing yards (on only two receptions).

Jennings totaled 79 of his yards after halftime. He was stuffed on a handful of plays by a swarming Falcons defensive front in the final minutes, but his 24-yard run with 28 seconds to go sealed the win.

A two-play sequence early in the third quarter showed how valuable Ross can be. In a span of less than 30 seconds, the junior scooped up a fumble and recorded a 49-yard catch-and-run touchdown.

Ross is the definition of an impact playmaker. But he also brings a steady quality, as evidenced by his other five catches for 43 yards. This was not a game in which the Canes defensive backfield was asked to defend the deep ball, but Ross did show great instincts helping stop the run and defending quick swing passes.

He will need to be at his best in the coming weeks if Cartersville is going to make a run at a state title.

Kyler Johnson, Cartersville — The junior earns this spot almost exclusively for his ridiculous 26-yard touchdown grab over a Flowery Branch defender, although he did total 46 yards on four catches.