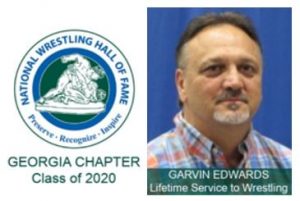 Posted Thursday, December 12, 2019
BY NICHOLAS SULLIVAN
Over his combined three decades coaching wrestling at Armuchee and Cartersville, Garvin Edwards created a coaching tree with branches extending across Georgia, as well as into Alabama and Tennessee.
Those former assistants and pupils-turned-peers have attempted to pay back Edwards in a multitude of ways. That included presenting him with an award for 30 years of coaching during a match in his final season with the Canes, but they did him one better this year.
Last month, Edwards earned selection into the Class of 2020 for the National Wrestling Hall of Fame. He was one of seven individuals tabbed by the Georgia Chapter to receive induction next summer in Stillwater, Oklahoma.
Edwards said he wasn’t sure who all nominated him for the honor, but he did say the contingent included former wrestlers and coaches he worked alongside during his 16 seasons in Armuchee and 14 in Cartersville.
“I was just very appreciative and felt very humbled that the people thought highly enough of me to nominate me for such a thing” Edwards said. “For me to be selected was just an outstanding feeling.”
A few days prior to the official announcement on Nov. 25, Edwards received a letter notifying him that he had been chosen for a Lifetime Service to Wrestling award. He will be honored along with the other Georgia Chapter inductees at the state tournament in Macon ahead of a formal induction banquet the weekend of May 2-3 in Gwinnett County.
While Edwards had plenty of success during his time in Bartow County, a majority of his success came in neighboring Floyd County. A graduate of West Rome High and Berry College, Edwards did his student-teaching stint at Armuchee before being hired for a full-time position with the school.
During his time there, Edwards led Armuchee to the 1991 Class A state championship (officially a co-championship with Pace Academy), along with runner-up finishes in 1989 and 1995. In ’89 and ’91, he was picked as the USA Wrestling coach of the year for the state. Edwards also was a five-time GACA region coach of the year, thanks to leading Armuchee to consecutive league titles from ’92-’96.
Edwards, 57, retired from Cartersville in 2018 after having completed 30 years as a teacher in Georgia. Hitting that mark meant he was fully vested in the state’s pension plan for educators.
In hopes of further securing his financial future, Edwards took the opportunity to move across the state line into Alabama, where he can earn a second pension check upon full retirement if he remains employed for 10 successive years. Edwards is now in his second year with Opelika Middle School, where he teaches, assists with the football team and leads the wrestling program.
Given his literal hall of fame resume, Edwards could have assuredly found a varsity coaching job somewhere in Alabama. However, he was more than happy to take the middle school gig, because his son and daughter-in-law live in nearby Auburn, where they both attended college.
“I really moved this way to try to be close to my son,” Edwards said.
Leading a middle school team is not a foreign concept for Edwards, although he’s used to having total control over a program. That being said, his coaching philosophy translates seamlessly to all ages and skill levels.
“At Armuchee, I ran varsity, middle school and youth programs,” Edwards said. “At Cartersville while I was there, for a while, I ran all three programs. I’ve run all three programs for many years. I’m getting on up in age, so it’s not quite as easy for me to do now as it was back in my youth.
“Coaching wrestling is the same no matter what level you’re on. You want to try to teach the basics, and the more experienced kids, you just try to take them to a little higher level. It’s the same thing, and I would still approach it the same way whether I was coaching a youth, middle school or high school program, understanding the age differences.”
Although Cartersville never reached the duals state tournament during his tenure, Edwards helped lay the groundwork for Brooks Gayton to get the Canes over the hump this past season. Edwards said he keeps up with Gayton, as well as other coaches he worked with during his time in Cartersville, and couldn’t be more pleased with the program’s success.
“I was very proud of them making it to the state tournament last year for the duals team,” Edwards said. “… You never want to leave the kids or the coaches you’re so familiar with and have helped you so much. It’s kind of bittersweet.”
Well, it certainly helps to see those kids and coaches achieving great things. Edwards also benefits from getting to work with another group of kids and coaches. Based on his track record, they are the ones who will reap the most rewards, although it possibly could lead to consideration down the road from the Alabama Chapter.
Either way, Edwards will humbly look back at his own career as a reflection of those who made it worthy of enshrinement.
“I look at it from the standpoint of all those people I worked with over that 30-year tenure,” Edwards said. “My success is [because of] their success. I’m more excited for them and less excited for myself.
“On a personal level, it’s very fulfilling, very nice to look back over a career and know that you were thought of very highly by those people.”
Purple Hurricanes Official Sponsor