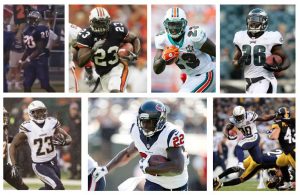 Former Cartersville High standout running back Ronnie Brown continues to be honored for his outstanding football career nearly five years after hanging up his cleats.

On Wednesday, Brown was part of the announced Class of 2020 for the Alabama Sports Hall of Fame, thanks to his legendary career at Auburn. He is joined by seven other honorees, including former Mississippi State football coach Sylvester Croom and New York Yankees legend Jorge Posada.

“I am beyond thankful, grateful and blessed,” Brown tweeted, in part, following the announcement. “Thank you to ALL who stood before me, stood beside in challenges and behind me in support. This is a TEAM achievement.”

Being chosen as part of the hall’s 52nd class is just the latest post-retirement honor Brown has received in the past year-plus. Earlier this year, Brown received an Outstanding Achievement Award from Auburn’s College of Liberal Arts. Last year, he was named Auburn’s 2018 SEC Football Legend.

During his time at Cartersville, Brown helped lead the Canes to the 1999 state championship and a 15-0 season. He earned AP Player of the Year recognition for Class 2A. The AJC selected him as a first-team running back as a senior and an honorable-mention choice as a junior.

After redshirting his freshman season at Auburn, Brown accounted for 439 yards from scrimmage in 2001. It earned him a spot on the all-SEC freshman team.

His sophomore year proved to be his best statistical season. Brown rushed for more than 1,000 yards and led the SEC with 13 rushing touchdowns. Brown, who will turn 38 next week, accounted for 556 yards as a junior before finishing strong his senior year.

Just like when he was with Cartersville, Brown finished out his senior year with an unbeaten season. He was an all-SEC selection, totaling 1,226 yards and nine touchdowns, in helping the Tigers to a 13-0 record. Auburn finished No. 2 in both the AP and coaches polls that season after defeating Tennessee in the SEC Championship Game and beating Virginia Tech in the Sugar Bowl.

Brown concluded his Auburn career with 2,707 rushing yards, 28 rushing touchdowns, 58 receptions and 668 receiving yards. He finished his career ranked top-10 in school history in each of those categories — the latter two being exclusive to running backs.

Brown was drafted No. 2 overall by the Miami Dolphins in the 2005 NFL draft behind quarterback Alex Smith. He racked up 1,139 yards from scrimmage and five touchdowns as a rookie.

The 6-foot, 223-pounder set a career high with 1,008 rushing yards and 1,284 yards from scrimmage during his second season with the Dolphins. Brown was named to the Pro Bowl in 2008 after accounting for 1,170 yards and 10 touchdowns.

In total, Brown spent six seasons with Miami. He scored at least five touchdowns in each of those years. In 2011, he played for Philadelphia. The following two years were spent with the then-San Diego Chargers. Before splitting time between Houston and San Diego during his 10th and final season in the league in 2014.

Brown finished his NFL career with 5,391 rushing yards, 1,966 receiving yards and 40 touchdowns. He is now a sideline reporter for the Auburn Sports Network and a financial advisor.

The ASHOF Class of 2020 will be honored during a banquet May 2 in Birmingham, Alabama, where the hall of fame is located. The eight newly selected members will bring the hall’s inductee count to 369.