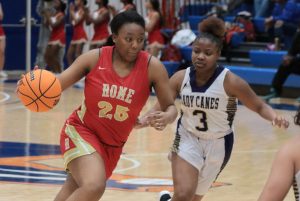 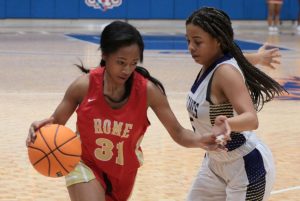 The Cartersville girls couldn’t slow down a hot-shooting Rome team, as the Canes fell in the semifinals of the Seven Hills Rotary/Rome News-Tribune Christmas Tournament Tuesday at Georgia Highlands College.

The fifth-ranked team in Class 5A, the Wolves knocked down nine 3-pointers to pull away for a 49-37 victory. Rome advances to Thursday’s championship game, while Cartersville is relegated to the third-place match against Model the same night at Berry College.

“They’ve got shooters, athleticism, length and size,” Cartersville head coach Cindy Moore said of Rome. “You can see why they’re undefeated. We gave them a battle first half. I was extremely pleased. We did a lot of really good things.”

Cartersville’s Lehla Thomas got off to a hot start, scoring her side’s first five points. Ariana Cochran also had a nice opening period. She had a nifty assist to Naijah Evans and also scored four points, including a buzzer-beating layup.

Rome quickly regained the lead early in the second quarter, drilling a trio of triples within the first two minutes. Cochran, who finished with seven points, connected from deep to even the score at 17-all.

“They shot it very well,” Moore said. “… I lost count at eight 3s. We tried to stay in front of them in the first half, and fortunately, we were scoring with them.”

While the Wolves controlled most of the period, Thomas finished a putback, drew the foul and completed the 3-point play. Kiera Milline later converted a pair of free throws to pull Cartersville within two points before Rome recovered to take a 31-25 lead into halftime.

“I was impressed we put up 25 in the first half,” Moore said. “I thought we got some good transition looks. I feel like we can build off that first half and have some confidence down the road.”

Despite being within four points midway though the third quarter, the Canes saw the game slowly start to slip away over the final four minutes of the period. An 8-2 run by the Wolves allowed the de facto home team to carry a 44-34 advantage into the fourth quarter.

Cartersville pretty much had to survive the third without two of its starters. Cochran left with an ankle injury, while Evans suffered a nose bleed. However, it did allow Moore to give some players off her bench a chance to face a high-quality opponent.

“Overall, it was a good test,” she said. “I thought we were right there in it in the first half. We got down double-digits and just really couldn’t close the gap. Ariana Cochran going out in the third really deflated us, because she’s kind of our leader.”

A Cartersville offense that saw its production fall from 14 points to 11 to nine over the first three periods completely dried up in the fourth quarter. The Canes were scoreless through the first 5:41 of the final stanza. Zoe Casey broke the drought just moments after she entered the game for the first time.

Thomas later converted a free throw for her last of a dozen points. It momentarily had Cartersville within nine points at 46-37, but Rome was never really threatened the rest of the way in reaching the tourney title game.

While the Canes would certainly rather be playing for the championship than third place, Moore can take solace in knowing her team is lightyears ahead of where it was last year at this point. The biggest difference is Cartersville’s ability to handle pressure.

Moore credited Cochran and fellow senior Cio Seigler for helping provide a calming presence. They will be key as the Canes will face many teams similar to Rome in Region 5-AAAA play.