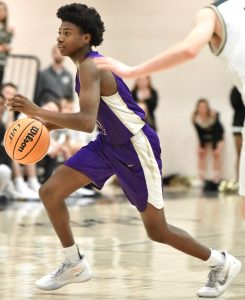 Cartersville’s Kam Callahan dribbles during Friday’s game at Calhoun.
RANDY PARKER/THE DAILY TRIBUNE NEWS
Posted Saturday, December 21, 2019
STAFF REPORT
The Cartersville High boys basketball team had three chances to tie or win Friday night’s game at Calhoun.
The Canes were down two points with six seconds left and at the free throw line, making the first but missing the second to keep Calhoun ahead by one point. Then, Cartersville missed two putback attempts off offensive rebounds before fouling to give Calhoun the win by a final score of 69-66.
The game was close throughout, with Calhoun taking a 20-17 lead after the first quarter, 33-27 lead at halftime and 54-47 entering the fourth.
Cartersville closed the gap in the fourth with all 19 points in the period coming from Kam Callahan, Micah Tart, Kolbe Benham and Robert Novak. Benham scored 16 in the game, Callahan and Novak each scored 15 and Tart had 14, giving the four Canes a combined 60 of the team’s 66 points.
Cartersville, now 1-3, will have a quick turnaround against Bartow rival Woodland Saturday in The Storm Center. 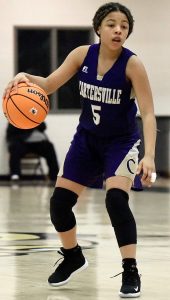 Cartersville’s Jakayah Draughn handles the ball during Friday’s game at Calhoun.
RANDY PARKER/THE DAILY TRIBUNE NEWS
Calhoun 38, Cartersville girls 21
Friday’s Cartersville High girls basketball game at Calhoun was a low scoring one. Unfortunately for the Canes, it was especially low scoring for them, as they took a 38-21 loss.
“Nothing went well,” Cartersville hared coach Cindy Moore said of the game. “Shots were obviously not falling. We didn’t shoot a free throw all game.”
Cartersville had just six points at halftime, falling behind 12-2 after one quarter and 22-6 after two periods of play. Only five players scored for the Canes and none of them in double figures.
Cartersville, now 4-4 on the year, will look to bounce back against rival Woodland at 3 p.m. Saturday in The Storm Center.
Purple Hurricanes Official Sponsor
Jan
22