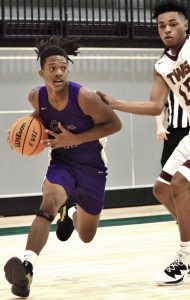 Cartersville junior Kolbe Benham drives towards the basket against The Walker School in the first round of the AHS Tiger Christmas Clash Friday in Adairsville. Benham had a team-high 24 points in a 74-71 loss.
RANDY PARKER/THE DAILY TRIBUNE NEWS
Posted Friday, December 27, 2019
BY NICHOLAS SULLIVAN
Walker 74, Cartersville boys 71
The Cartersville boys overcame a double-digit deficit to tie its first-round matchup in the AHS Tiger Christmas Clash with The Walker School late in the fourth period. However, an and-1 bucket in the final moments Friday pushed the Wolverines past the Canes, 74-71, in Adairsville.
The third-ranked team in Class A-Private, Walker (11-1) jumped out a double-digit advantage in the opening stanza, doubling up Cartersville (2-4) by a 24-12 margin by the start of the second quarter.
Kolbe Benham had half of the Canes’ dozen points in the first quarter to keep his team afloat. Benham poured in 10 points in the second period, while Marquail Coaxum and Kam Callahan added six apiece to help Cartersville start to rally.
Walker weathered an eight-point third quarter from Kyler Johnson to carry a 62-52 advantage into the final period.
After a scoreless third quarter, Benham chipped in eight points in the fourth. Meanwhile, the Canes defense held the Wolverines to single-digit points until the traditional 3-point play with six seconds remaining sent Cartersville into the consolation bracket.
Benham led the Canes with 24 points. Micah Tart finished with 12 points, Coaxum added 11 and Johnson wound up with 10.
Cartersville will face Trion, which fell 75-60 to Cornerstone Prep, at 11:30 a.m. Saturday.
Sep
23