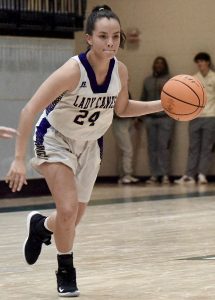 Cartersville senior Cio Seigler controls the ball against North Cobb Christian in the first round of the AHS Tiger Christmas Clash Friday in Adairsville. Seigler totaled 18 points on six made 3-pointers in a 61-44 victory.
RANDY PARKER/THE DAILY TRIBUNE NEWS
Posted Friday, December 27, 2019
BY NICHOLAS SULLIVAN
Cartersville girls 61, North Cobb Christian 44
Cio Seigler came up huge with six 3-pointers to lead the Cartersville girls to an opening-round win over North Cobb Christian in the AHS Tiger Christmas Clash Friday in Adairsville.
Seigler connected three times from beyond the arc in the first quarter en route to 18 points and a 61-44 victory.
The win sets up a tasty semifinal matchup between Cartersville and Cass at 4 p.m. Saturday. The Bartow County rivals haven’t faced off the past couple of seasons, but they will be Region 7-AAAAA foes beginning with the 2020-21 school year.
Thanks to Seigler’s hot start, the Canes (6-4) opened up a 21-4 lead after the one period. Seven different Cartersville players scored in the second quarter, as the Canes increased their advantage to 39-18 by halftime.
Cartersville’s offense dried up a bit in the third quarter, but a pair of triples by Seigler, who also drew two charges, helped keep the Canes up by a healthy 49-32 margin entering the final period. Over the final eight minutes, six players scored exactly two points for Cartersville to match the 12 dropped in by Mary Claire Norman — all on 3s.
Naijah Evans chipped in with eight points — two in each quarter — for Cartersville, while Lehla Thomas and Jamiya Moore added seven points apiece.
Brooke Moore led North Cobb Christian (9-2) with 22 points, and Norman finished with 20.
Sep
22