Cartersville girls pull away for win over Woodland 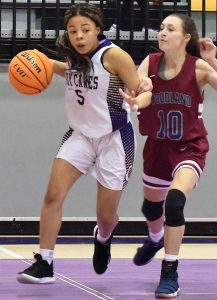 However, the Canes caught fire during the second half, using a 23-1 run over a roughly 10-minute stretch of game time to pull away from the Wildcats for a 43-22 victory in The Storm Center.

“We found that gear, and then started being able to get some confidence, some easy baskets,” Cartersville head coach Cindy Moore said of the decisive spurt. “That loosened us up a little bit. We started finding that open player a little quicker. I thought after not performing [Friday] and in the first half, we lost a bit of our confidence. The first couple of easy baskets, I think, you could see it starting to come back.”

After holding a slim 16-12 lead at halftime, the Canes (5-4) got a couple of quick buckets early in the third quarter. The Wildcats (2-8) were still within 20-15 before things started to snowball.

Six different Cartersville players scored in the third quarter to help the Canes double up the visitors, 32-16, entering the final period. Cartersville started the fourth quarter on an 11-0 run until a couple of late Abigail Taylor 3-pointers boosted Woodland’s final line.

“We struggled to score the ball pretty much from the first quarter on,” Wildcats head coach Kyle Morgan said. “I think we had three points, four points and six points in the second, third and fourth quarters. It’s very hard to win basketball games when you’re not scoring. At times, we were our own worst enemies, turning the ball over and missing some shots I thought we should make. We didn’t do a good job of cleaning up the boards. They had some big second- and third-shot opportunities.

“Give them credit, they played hard. I wish we could have done some things better, but the credit goes to them.”

Things started off well enough for Woodland. The Wildcats had a trio of 3-point plays in the first quarter — a traditional one by Gracie Styles and long-range shots by Ansley Evans and Jordan Thompson, who led the team with eight points.

Even still, Cartersville managed to hold a 10-9 edge. It took the Canes less than five minutes to score more points than the six they managed the entirety of the first half against Calhoun Friday, when they ultimately fell 38-21.

Neither team had much go right offensively in the second quarter, although Cartersville possibly got a lift from a late 3 by Jamiya Moore. Or it could have been Cindy Moore’s halftime speech that got her to team to bounce back in the second half.

“We challenged them at halftime to pick it up defensively, and we did,” the coach said. “When you lock somebody down on defense, you give yourselves some chances to score and get a lead. I thought, we got more transition baskets and got ourselves out in the open court, which is definitely one of our strengths.”

“I thought she really came off the bench and was a spark,” Moore said of Cunningham, who finished with eight points and four rebounds. “She’s got that personality that everyone loves and is drawn to, so when she gets things rolling, it gets everybody else excited.”

Cunningham wasn’t the only Cartersville player to put together a solid performance. Lehla Thomas posted 10 points and eight rebounds; Ariana Cochran had eight points; and Jakayah Draughn chipped in with seven — all during the second half.

“He gets a lot out of his kids,” Cindy Moore said of Morgan. “He puts them in the right spot, and they’re very patient on offense. They want to stay on offense and keep the ball away from us. In the first half, they did that.

“I thought, we weren’t as aggressive, and they got some things that they needed to do. We were kind of on our heels, but the second half was a much different ballgame. We challenged them, and we’re pleased going into a little break.”

Both teams will be back in action Friday in the Adairsville Christmas Clash. Cartersville will face North Cobb Christian at 10 a.m., and Woodland will come up against Trion at 4 p.m.

“We’re looking forward to playing in another tournament,” said Moore, whose team placed third in the Seven Hills Rotary/Rome News Tribune Christmas Tournament earlier this week. “Anytime you can play in a tournament here in Bartow County, it’s always nice. All four Bartow County schools are in [the girls bracket]. The four of us haven’t been in a tournament together in a very long time. We’re looking forward to it.”